SSLA is keen to promote research work and output for faculty and students. Apart from the program requirements of dissertation and seminar, students engage in intensive research work along with the Research Cell, Faculty Projects and Special Research Centers. SSLA also annually publishes the Journal of Interdisciplinary Studies.

The Research Cell is aimed at enhancing the research capacity of faculty and students. Students at SSLA undergo thorough Research Method courses followed by a Dissertation and a Seminar Paper which are coordinated by the cell.

The Research Cell is also responsible for informing students about intercollegiate research opportunities and encouraging students to publish original work in leading journals and presenting at conferences. The cell also organizes Academic Writing workshops in order to hone writing and analytical skills of students. Moreover, the Cell also encourages faculty and students alike to take up research projects on contemporary local, national and international issues.

Activities of the Research Cell are coordinated by Khaliq Parkar, Sumithra Surendralal, and Vaidyanatha GV.

SSLA students and faculty collaborate on small and large research projects. Some notable projects are:

The Indian Association for Big History

The Indian Association for Big History (IABH) emerged out of the interaction of a group of scholars who worked together to produce the landmark collection, From the Big Bang to Galactic Civilizations: A Big History Anthology (2015–2017). During the process of editing the three volumes, it was proposed to form an Indian association for big history. Anita Patanka, director of the Symbiosis School for Liberal Arts (SSLA) in Pune, Maharashtra offered it a home at her institution in 2016. 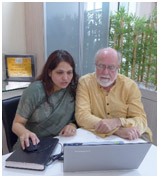 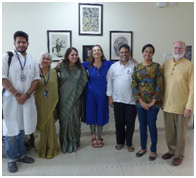 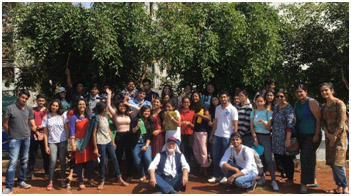 In January 2018, SSLA offered the first course in big history in South Asia, which was taught by professors Afshan Majid, Priyadarshini Karve and Barry Rodrigue. The course, ‘Humanity and Big History: Our Challenge for Survival’, is now part of the core curriculum that is taken by all third-year students. SSLA also hosted an international conference on Interdisciplinary Studies and Big History in March 2018 in partnership with the Indian Association for Big History and the Asian Big History Association. The connection between interdisciplinarity and big history was no accident. SSLA is the first undergraduate programme in liberal arts in India (2011), with interdisciplinarity being central to its mission. In this way, big history is seen as a form of super-interdisciplinarity, one that reflects the progressive and innovative nature of its work.

SSLA works in partnership with J.F. Oberlin University in Tokyo to co-sponsor international peace centres. Our two universities are also where the two first courses on big history were offered in Asia – at Oberlin in 2016 and at SSLA in 2018. In this way, we have linked big history to contemporary issues.

One of the first big historians in India was Tom Gehrels (1925–2011) a professor of astronomy at the University of Arizona in Tucson, Arizona (USA). He did his Ph.D. in astronomy and astrophysics at the University of Chicago in 1956, where he studied under Indian astrophysicist Subrahmanyan Chandrasekhar. Besides his educational work, as with the Space Science Series that he initiated at the University of Arizona Press, he also pioneered technical research and practical applications. He was principal investigator of the Pioneer 10 and 11 imaging photopolarimeters, which discovered Saturn’s F ring, and participated in the discovery of over 4,000 asteroids and comets. Dr Gehrels founded the Spacewatch Project in 1980, which uses telescopes on Kitt Peak to survey the sky for dangerous asteroids and comets, a project he led until 1997. He was a lifetime Fellow of the Physical Research Laboratory in Ahmedabad, India. Tom’s final work was a tribute to his mentor, in which he used Chandra’s formulation for mass to describe the multiverse, an expanded view of existence wherein our universe is part of a much larger multiverse. This essay was published in the third volume of our anthology in 2017. 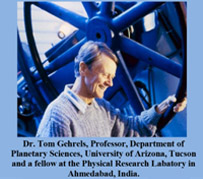 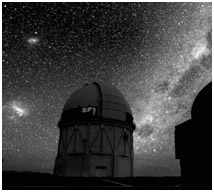 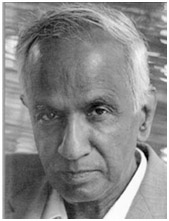 Our three-volume book series, From the Big Bang to Galactic Civilizations: A Big History Anthology, is the first international and comprehensive collection of essays relating to the field of big history and universal studies. It includes articles by 100 scholars from 25 nations. Our Place in the Cosmos: Big History and Universal Consciousness

SSLA collaborated with the International Journal for the Transformation of Consciousness, which is based in Bangalore and edited by Mathew Chandrankunnel, to produce a collection of philosophical essays relating to big history and universal studies.

Our Place in the Cosmos: Big History and Universal Consciousness, special edition of The International Journal for the Transformation of Consciousness, vol. 3, no. 1, June 2017. Barry Rodrigue, lead editor. Members of the IABH collaborated with the Fireflies Intercultural Centre in Bangalore and managed by Siddhartha to produce a collection of essays relating to big history and sustainable futures. The Symbiosis Collaborative for Asian Ethnography is an extension of the Anthropology and History Departments at SSLA. Faculty and students work together to collaborate with public and private agencies and individuals to document social and cultural heritage throughout the region. Begun in the autumn of 2017 as a faculty-student endeavour, projects were started in our region of the Sahyadri Mountains and adjoining areas of the Konkan Coast and Deccan Plateau. In addition, the faculty have their own on-going research projects. Our Collaborative initiates, manages and coordinates heritage projects. Activities underway are in Maharashtra, Goa, Karnataka, Kachchh, and the North East. For more information please contact us, Barry and Afshan at Lohagad Fort,