On 31st January, SSLA played host to renowned art historian Mr. Neil MacGregor who is the former director of both the National Gallery and the British Museum- the flagship conservation institutions of the United Kingdom that are publicly funded. He delivered a lecture on “India and the world– A History in nine stories”. Among the other guests of honour were Mr. Sabyasachi Mukherjee the director of Chhatrapati Shivaji Maharaj Vastu Sangrahalaya (CSMVS), Ms. Mahrukh Tarapor, an Indian museum professional and an art consultant, Dr. Vidya Yeravdekar, Mrs. Mujumdar and renowned poet Mr. Ranjit Hoskote. Prior to the talk, Mr. MacGregor held a special session with the students of SSLA which was attended by students of History and Anthropology. He spoke to the students about how history is constructed on the basis of certain objects of importance, which are represented through these artifacts that have gained prominence over time. He lives his life through these artifacts by excavating and studying how they have helped in human evolution. 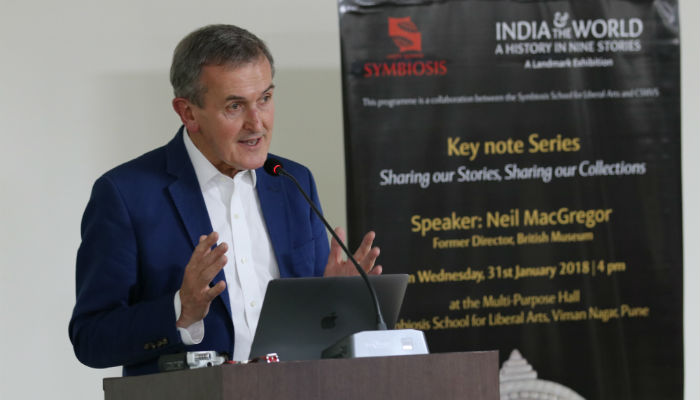