A unique first-of-its-kind workshop was organised at Pune from 22-24 August, 2019. The
workshop was part of an innovative Pan-India initiative that works towards informing and
facilitating Gender Audit processes at universities and colleges. The workshop was hosted by
Symbiosis School for Liberal Arts (SSLA) and organized in collaboration with Women in
Security, Conflict Management and Peace (WISCOMP). WISCOMP is a New Delhi based South
Asian initiative that promotes women’s equal participation and leadership in security and
peacebuilding. The workshop is part of WISCOMP’s HAMSA project that seeks to
institutionalise gender-just norms, policies and practices at higher educational institutions
(HEIs).
This workshop sought to open up spaces within college and university campuses for engaged
dialogue to promote and nurture inclusion and equity. This initiative was supported by the Public
Affairs Section of the U.S. Embassy, New Delhi. The opening remarks were given by Dr. Anita
Patankar, Director, SSLA where she spoke of how a similar process had preceded introduction of
Peace and Conflict Studies and Gender Studies. Dr. Hrishikesh Soman, Principal, Symbiosis
College of Arts and Commerce, emphasized the importance of taking small steps towards gender
equality. Gender discrimination is so embedded in our structures and psyche that he believed it
will take a long time to eliminate. Ms. Mandeep Kaur of the US Embassy and Dr. Meenakshi
Gopinath, WISCOMP Director gave pertinent emphasis to multidisciplinary and multicultural
exchanges to eliminate stigmas around gender. This was further emphasized upon by Dr. Kristy
Kelly of Columbia University and Visiting Faculty at Drexel University, Professor Rukmini Sen
(Ambedkar University Delhi), Professor Vibhuti Patel (TISS –Mumbai) and Prof. Kathleen
Modrowski (O.P. Jindal Global University, Sonipat). The workshop comprised of multiple
sessions that included, lectures, presentations and brainstorming in small breakout groups.

The session that brought in the impact of personal stories and hearing the voices of women from
different socio-economic and cultural backgrounds was ‘Calling out Patriarchy: When Women
Write’. The idea was to address intersectionality in feminism and make conversations inclusive.
In this session, the participants were each given, a story or a piece of narration to read and share
reflections. There were hard-hitting testimonials of discrimination faced by women in their
everyday life. They were drawn from the work of Indian women writers, activists and
researchers. The discussion foregrounded how the safety of women continues to cause a sense of
fear in the minds of women as well as their families and friends. Participants discussed a range of
issues including the marginalization that differently abled woman face at two levels, given that
there are no amenities for differently abled individuals. We spoke about traumatic events
including rape and sexual abuse, also addressing the trauma of the victim rather than focusing on
the perpetrator. The exercise compelled the participants to think about the many burdens that
women live with. It also raised questions regarding the nature of punishments that perpetrators of
sexual violence receive.
The public lecture on &#39;Equity and inclusion: Lessons from the Right to Information Movement&#39;
saw one of the brightest and youngest Right to Information Activist, Ms. Anjali Bhardwaj
addressing the audience. She spoke of the legislative aspect of the RTI Act 2005 and how it has
been practiced as an instrument of change in the country. She referred to the RTI as “one of the
most progressive legislations in the world, because it came with the active participation of the
people”. Touching upon examples of crucial cases from the grassroots, she highlighted a varied
range of issues – how RTI empowers individuals to ask questions, expose corruption, demand
accountability. She also spoke of the threats faced by the ones demanding state accountability.
“The more vulnerable you are in the scheme of society, the more likely you are to be
threatened,” she said whilst talking about the wide disparity in the percentage of applications
filed by women in the country. She thereafter engaged in a short discussion with the audience at
the workshop.
At a student-exclusive session led by Ms Sonali Vyas, participants learnt the use of a mobile app
– Safetipin, which allows the user to check if a location is safe and also score locations.
Locations are assigned a score based on “safety audits” conducted by the users of the app. A
certain set of parameters are used to assess the safety of a neighbourhood/location. These

parameters include lighting; whether the location is deserted; number of women and children
seen; the usability of the walk path; and the accessibility of public transport. Ms. Vyas brought to
light the importance of auditing spaces and collecting information about the safety of public
spaces around the city. She brought in theorist Jane Jacobs and how her ideas have
revolutionised urban planning. Many of her theories have been incorporated in the design of the
app. She also gave multiple examples of how the user generated data is authenticated, and how
different authorities have used it to improve cities across the world. The app is new to Pune and
has covered only a few areas, but Safetipin intends to expand it to larger areas in the city.
Keeping this in mind, as an interactive activity, the students were asked to audit any two spaces
around SSLA.
The workshop program then centrally focused on how to conduct a ‘Gender Audit’ which was
facilitated by Dr. Kristy E. Kelly. She is a research scholar at Columbia University and. She
specializes in the sociology of gender and international education and uses gender and education
as critical lenses to examine social change. She has researched roles of gender in her college. The
findings she shared from her work compelled faculty, students and administration to think about
how gender plays a role in our daily routine and behaviour. Over the course of multiple group
activities students as well as faculty come up with research questions for the gender audits they
could conduct over the coming year. Her sessions made faculty and students interact
uninhibitedly and helped both the sections see things from the other’s point of view.
The interactive format of the workshop acted as a catalyst to the high student participation.
Students took part in the workshop as both observers and participants. Day 1 witnessed the
students asking pressing questions and engaging in interesting debates. The session titled
‘Calling out Patriarchy’ enabled the students to share their thoughts with faculty from various
institutions and vice versa. Day 2 kick-started with a safety audit using the innovative mobile app
Safetipin. Students were asked to list out public spaces and mark the presence of women and
men in these spaces at different times of the day. The activity resulted in students sharing
anecdotes and observations. The latter half of the session was dedicated to the students
conducting a safety audit on the streets around the campus with the app. The next session on
gender audits began with providing real life examples of implementing gender audits in Higher
Educational Institutions and the importance and pertinence of conducting such audits across

campuses. The session was taken forward to Day 3 by dividing the participants into student and
faculty groups. These groups then re-evaluated their campus’ policies, curriculum and overall
gender inclusivity of their training programmes. Then, each group came up with an action plan to
be executed in their respective campuses.
The workshop ended with a performance by SSLA’s Natak Society in collaboration with ‘It
Could Be Verse’, SSLA’s poetry club. The three act play looked at addressing the problems of
‘Gender on Campus’. It began with a scene of an individual looking for which bathroom to avail
of, choosing to wear a skirt despite being male-bodied. It went on to show the ragging and
bullying he faced at the hands of his peers as well as belittling by his faculty. The second act was
about how in research consultations, oftentimes, male professors are easily able to harass young
female students who seek mentoring. The third act revolved around the gendered nature of
subjects such as sociology and the taboo around people of certain genders choosing to study
certain disciplines. Following this, two auto-ethnography videos were played, showcasing the
influence of culture as self-reflection. 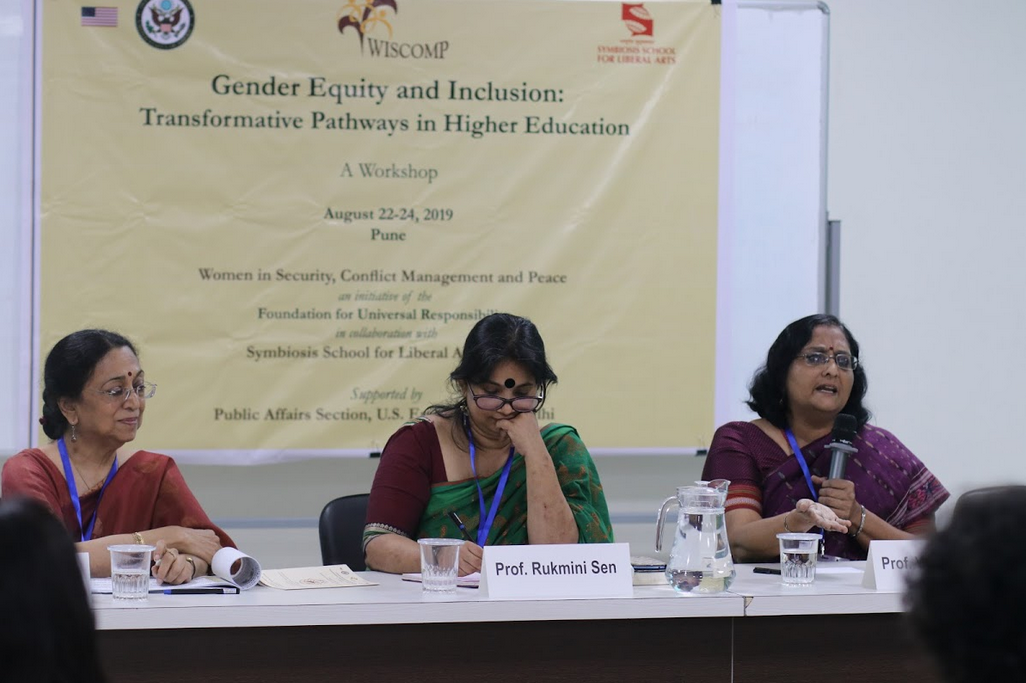