SSLA hosted guest lecturer Dr. Scott Paeth from 30th July -  2nd August 2018, from DePaul University - where he is a professor of Religious Studies. During his time at SSLA, he took lectures ranging from ‘Politics in the name of Ethics’, ‘Introduction to Foucault’, ‘Religion and Globalisation’, ‘Materialism and Idealism’, ‘Introduction to Kant’ and ‘Ethics in International Politics’.

On Tuesday, 31st July, Dr. Paeth gave one such lecture on the topic of ‘Nations and Nationalism’. He spoke about concepts such as ethnic pluralism, addressed the various forms of nationalism, elaborated upon the differences between a ‘nation’ and a ‘nation-state’, and also gave the students a different perspective on globalisation and its feasibility. The event concluded with a question-answer session where Dr. Paeth answered a number of insightful questions from the students. 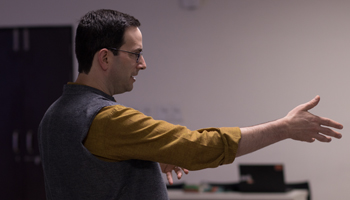