The 72nd Independence Day celebrations were held on the morning of 15th August, 2018. The Chief Guest for the event was Dr. Shashikala Gurpur, Director at Symbiosis Law School and the Guest of Honour was Prof. Shivali Lawale, Director at Symbiosis School of International Studies. Other dignitaries included Prof. Anita Patankar, Director at SSLA and Prof. Shweta Sinha Deshpande, Deputy Director at SSLA.  The host/compere for the day was Tanmay Neogi, a third-year student of SSLA. He began with a short introduction which was followed by a Welcome address by the interim president of the SSLA student council, Pranati Narayan Visweswaran. She emphasized the idea that independence should include freedom from oppressive and discriminatory thoughts and actions, urging people to be more kind and empathetic. Following this, the dignitaries were felicitated and the National flag was hoisted as everyone present sang the National Anthem.

The program then moved indoors and commenced with the Chief Guest’s address. She delivered a very inspiring and thought-provoking speech that elaborated on India’s ability to rebuild itself from the ruins of colonialism. The final segment of the event was a Cultural program by SSLA. This commenced with a welcome song by Prof. Sonia Sathe. The next performance was by SSLA’s Natak Society, who performed a musical-theatre piece on the current socio-political situation in India. This was followed by a collaborative rendition of patriotic songs by SSLA’s music club and the children of SSLA’s staff. The event ended with the distribution of gifts to the staff and their children following which refreshments were served to all the attendees. 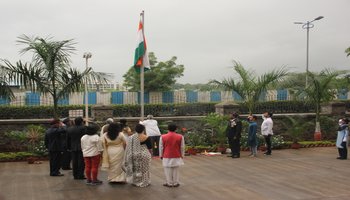