On the 19th of August, Symbiosis Vishwabhavan in Senapati Bapat Road hosted a program called “Why Scientific Temper?”. The event was open to students and faculty across all Symbiosis Campuses. The event was put together to announce that the 20th of August has been declared as National Scientific Temper day in the memory of Dr Narendra Dabholkar. ‘Scientific Temper’ is a way of living which involves social thinking and scientific methods. There were many esteemed guest speakers at the event such as Dr Vivek Monterio who spoke to the audience about the need for Scientific Temper. This was followed by a detailed talk about the same by Dr. Jayanth Narlikar, who worked with Dr. Dabholkar. Mrs. Mukta Dabholkar added to the ceremony by sharing her views on present-day superstitions about Scientific Temper. Dr. Satyajith Rath followed up by talking about its pros and cons. The event concluded with a question-answer session for the seated panel. 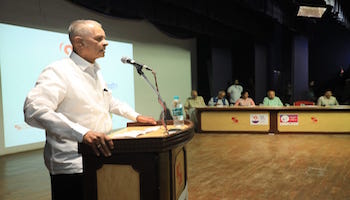